10 Things NOT to do in TURKEY 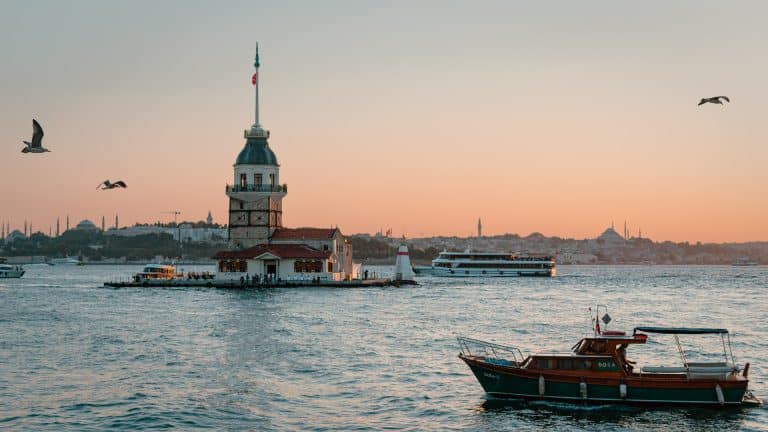 Turkey is a cultural and traditional melting pot where the east meets the west. Its enchanting history, magnificent beaches, beautiful scenery, and hot weather have made it a tourism hotspot. However, there are certain things that you should avoid doing while on vacation in Turkey.

Turkish people are famous for their friendliness and kindness. You can even receive invitations to a family dinner or lunch from people you just met. However, there are several lines you should not cross when interacting with the people of Turkey…

One is evidently mocking Turkish national symbols. The flag is very important to the Turkish people. Any jokes or bad behavior with it could significantly offend someone.

9. Do not enter a mosque in revealing clothing.

In public, Turkish women wear the tesettür style, combining a headscarf and a topcoat covering the arms and legs. Clean, modest clothing that covers the thighs, shoulders, and upper arms are valued in mosques. Sleeveless shirts and shorts are not appropriate for either men or women. Follow all guidelines carefully, and remember to remove your shoes before entering any mosque in the country.

8. Do not accept the first price offered to you.

Haggling is common in Turkey. While you should not be impolite in your counter-price, bargaining is expected in markets and bazaars. When bargaining, the typical rule of thumb is to start by offering 40% less than the price you’re given. Don’t worry about sounding harsh – they’ve raised the price because you’re a tourist!

7. Don’t play music during the call to prayer

Although Turkey is officially a secular country, around 96 percent of the population are Muslim. So, it’s reasonable to say Turkey is a Muslim country in general, and you’ll notice this when you hear the call to prayer five times a day. While it is more accepting than other Muslim countries, it is important to respect the religion. Disrespecting a country’s culture and religion is a big no-no. Some tourists are irritated because bars and clubs switch down their music during the call to prayer. Remember to be respectful of these practices, or you may have a hard time in Turkey.

6. Don’t assume that someone is being disrespectful if they tut and nod up.

This is an odd one, but it’s something you’ll notice if you interact with locals. When someone tuts and then nods their head upwards, such as a reverse nod, it implies “no.” They’re not being impolite or doing anything unusual; they’re simply telling you that they don’t want anything you’ve asked for.

5. Do Not Allow Taxi Drivers to Take You on “Scenic” Routes

Some Turkish taxi drivers like ripping off tourists, who will either take the long way to your location or travel with a broken taxi meter to compensate for the lost time. To prevent these con artists, always take cabs that are connected to a taxi stand. The logos on the doors distinguish these cabs, indicating that they work for a fee rather than on a rogue and corrupt basis. You can also download the BiTaksi App and order a dependable cab from wherever you are or have someone call you a cab from a nearby taxi stand, such as your hotel’s reception.

As with any tourist destination in the world, taxi drivers may sometimes take the scenic way and charge you more. This is not true of all taxi drivers, but some will, particularly in tourist areas and even in Istanbul.

If you need to take a cab, find out how much it will cost from a waiter or hotel staff member ahead of time. Then, before you get into the cab, try to negotiate a price with the driver ahead of time or let them know you have an estimate of how much it should cost. Most will go by meter, but if they know you’re already aware, they’ll take the direct path.

4. Do Not Drink Water Directly from Tap

Turkish water authorities, such as ISKI in Istanbul, operate water treatment facilities where tap water is treated. As a result, when the water exits the reservoir, it is safe to drink.

The municipalities can’t, however, address all the problems. For instance, old water tanks and pipelines can contaminate water. In order to prevent this contamination, a little quantity of free chlorine may be added to it, which changes the flavor and odor of the water.

Although it is safe to drink, most Turks opt to just use the tap water for hot beverages and cooking. So they boil it before using it to dispel any concerns about contamination. And for visitors, it is advisable to carry your own water while traveling and drink bottled water instead of tap water.

3. Do Not Be Disrespectful Of the Customs during Ramadan

Ramadan has cultural and religious significance for Muslims all over the world. When it comes to the majority of Turkey’s population, strictly adhering to the regulations is a given as a manner of displaying their commitment.

Ramadan is celebrated according to the Islamic calendar rather than the Georgian calendar, so check to see if the month coincides with the month you intend to visit the nation. If it does, it is advisable not to drink or eat in public but restaurants and cafes will normally remain open for tourists.

2. Do Not Show Off Your Wealth

In Istanbul, like in many other major cities, there is a chance of being a victim of theft or other crime. Although pickpocketing, mugging, and bag snatching incidents have significantly decreased since CCTV cameras were installed, bad encounters can still happen. The coyotes of Istanbul hunt day and night and move quickly, much like the actual coyotes. They victimize those who stand out as being easy pickings. Don’t let them sour your vacation. Just keep an eye out in and around popular tourist destinations like Sultanahmet, Istiklal Street, and Taksim Square, and avoid flaunting your wealth.

1. Don’t Wear Shoes When Entering A Place of Worship

Turkey is famous for its finely constructed mosques, such as The Blue Mosque. If you are visiting Turkey for the first time, you should be aware of the Turkish custom of taking their shoes off outside when entering a mosque.

You may have noticed that they do not wear shoes inside their homes too. Thus, when visiting Turkey, make sure to remove your shoes before entering a mosque, or you will surely insult the locals, who will see it as a mockery or affront to their customs and beliefs, and you may be asked to leave or go out and enter only after you have removed your shoes. This is one of the most crucial things to avoid doing in Turkey.

Any other question you want an answer to? Let us know below!